Special thanks to Claire Connolly for time and effort into sourcing our club history.

Prior to 1927, one team represented Tralee in the Kerry Senior Football County Championship namely Tralee John Mitchels. As this team was so successful the Kerry County Board requested that it should be divided into three individual teams representing, Boherbee, Rock St. and Strand St. The area of the town which these clubs would represent were based on the formation of the three I.R.A companies which operated in Tralee during the War of Independence. This decision brought into being the three clubs now known as Boherbee John Mitchels, Austin Stacks and Kerins O’Rahilly’s.

The Boherbee John Mitchels in the intervening years since 1927 have been regarded as one of the most progressive and successful clubs in Kerry. While of late success on the playing field had eluded Mitchels their past achievements had given them a unique place in Kerry G.A.A history books most notably their record breaking five Senior Football titles in a row, 1959-1963. It is believed by many Kerry G.A.A observers that this record is very unlikely to be emulated in the future. 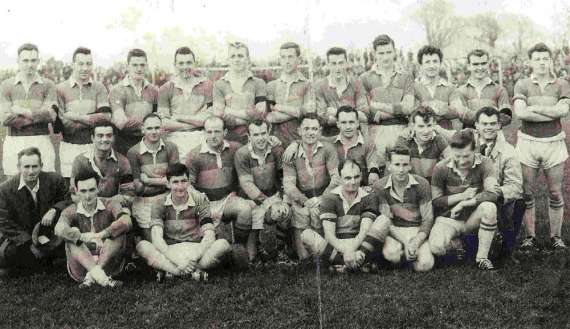 The Boherbee John Mitchels Club are now the holders of 10 Senior, 1 U-21 and 3 Minor County Championships. The Club has given great players to the County Teams over the years winning a huge number of All Ireland medals in all grades. The Club has also given many outstanding officials to the G.A.A at County, Provincial and Central Council level. One such man was Jerry Myles. In 1986 the Club opened their Bar and Pavilion which has added to the social side of activities with the Club and it has also given local residents a focal point within the John Mitchels area.

John Mitchel was born at Camnish, near Dungiven, Co Derry, on 3 November 1815. The son of a Unitarian minister and United Irishman, he was educated at Trinity College, Dublin, before entering a solicitor’s office in Newry, Co Down. He later practised in Banbridge, Co Down. In 1836, he eloped to England with sixteen-year old Jane Verner, but was brought back in custody; they eloped again in 1837 and were married.
Mitchel began writing for The Nation, and when Thomas Davis died in 1845, Charles Gavan Duffy invited Mitchel to join the newspaper. He subsequently wrote masterly descriptions of the potato famine, contributed a life of Hugh O’Neill to The Library of Ireland, and edited the poems of Davis and James Clarence Mangan. In 1846, Mitchel and other Young Irelanders broke with Daniel O’Connell, rejecting the doctrine of ‘moral force’, and founded the Irish Confederation.

More impatient than Duffy, Mitchel soon left The Nation and the Confederation, and in February 1848 published the first issue of The United Irishman. It openly preached sedition to ‘that numerous and respectable class of the community, the men of no property’, and in May 1848 Mitchel was convicted of treason felony and sentenced to fourteen years’ transportation. He hoped his sentence would provoke an insurrection, but nothing more than a skirmish in Co Tipperary ensued.

Sent to Van Diemen’s Land (now Tasmania), Mitchel escaped in 1853 to America, where he published his famous Jail Journal. In one entry, he welcomes the Crimean War believing an Irish rebellion can succeed only if England is preoccupied elsewhere. The sentiment influenced Patrick Pearse in 1916.

Mitchel launched several newspapers in America. In 1867, he founded the Irish Citizen in New York, but angered Fenians by suggesting they should give allegiance to their new country. In 1875, he was returned unopposed as MP for Tipperary, but was disqualified as a convicted felon. Returning to Ireland, he was again elected, but died at Dromalane, Newry, on 20 March 1875 before he could be unseated.

Jerry Myles played a major role in the development of the Austin Stack Park in the 1940’s. It was a project that he gave considerable time and energy and he had the satisfaction of seeing it brought to successful fruition in the laying out and enclosing of the sportsfield and its dedication as a memorial park to the late Austin Stack.
After his death a plaque commerorating his involvement in the Austin Stack Park was unveiled by his beloved John Mitchels Club.
Jerry Myles was Chairman of the John Mitchels Club for 25 years. He was also Secretary of the Tralee District Board for 15 years and joint Honorary Secretary of the Kerry County Board for a similar length of time. Most unassuming of men he prepared to do the routine work to smooth difficulties, to shoulder responsibilities and cared not that others might get the plaudits.
He died May 30, 1950

Looking for a perfect place for a party?
Book Party Now!
Close Menu